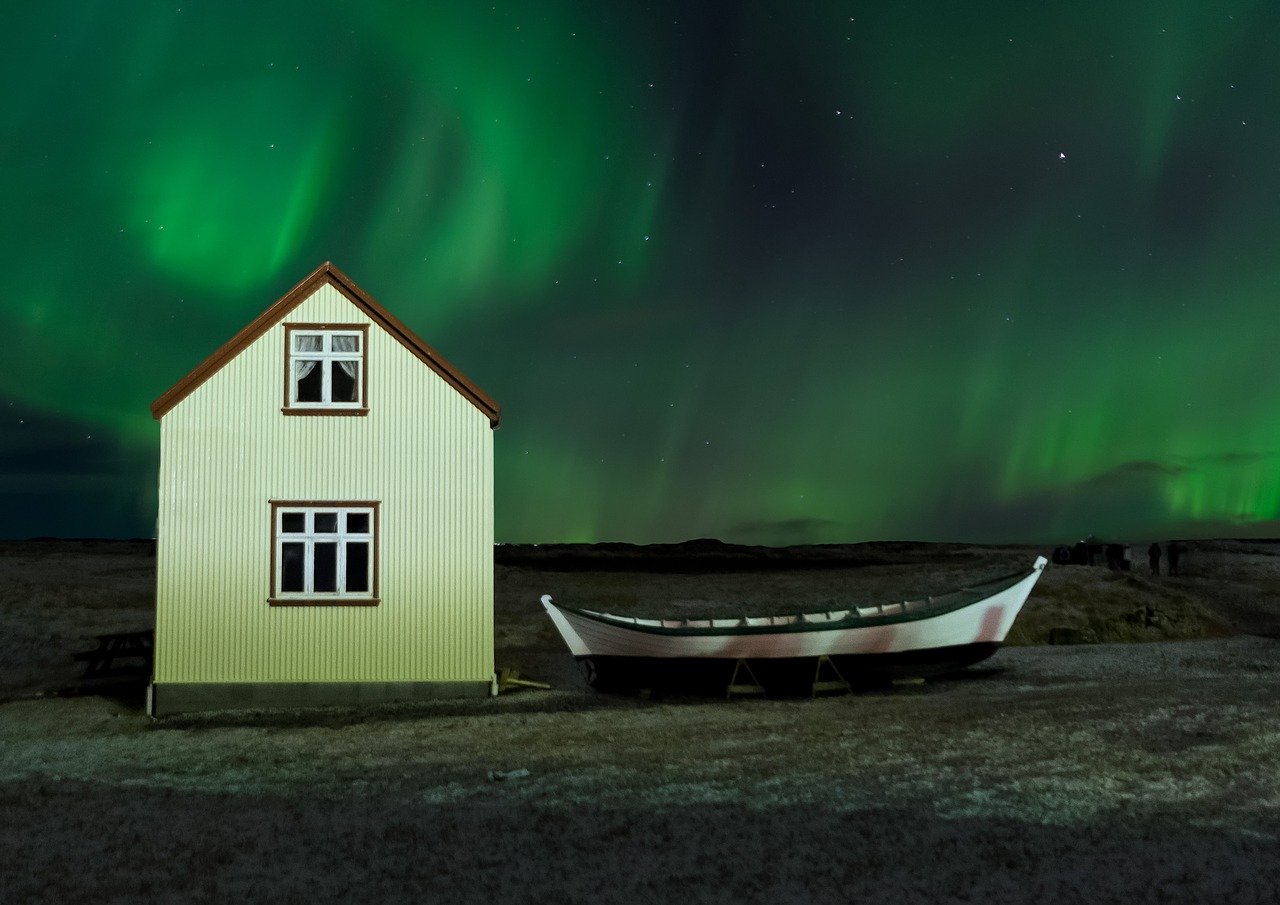 I haven’t been here yet, but this is what I imagine it will be like. Dark as ink from waking till sleeping, with an occasional reprieve when the sun lifts its lead-heavy head. Fissures of aurora borealis dancing above bare-branched trees as ice crystallises in the air. Eyeballs rolling in the fight not to freeze; skin tightening; breath blooming like fog.

Laughter – awkward, as I try to understand this alien place where myths create a richer backdrop than the cityscape where we fell out of love. You, at ease? Or uncertain too, embarrassed by the suddenness with which you left me behind.

I’ll meet you at the hotel you’ve recommended, a boutique one that exploits its eccentricity to holidaymakers who regards it as ‘quaint’. By the time I reach you, I’ll have travelled from the airport to Reyjavik, by winged chariot perhaps – although my funds are limited, especially in this climate.

The volcano slumbering nearby, an ever-present danger, grumbling quietly through its dreams.

Every cell of me will be tingling from the extreme temperatures. I can’t even anticipate the cold that awaits. During a winter stroll on Clevedon Pier, when sea battled wind and my nose was crimson, I asked: “Is it like this?”

You’d beamed at my naivety. “It’s more like when the shark bites the legs off the girl in Jaws and she doesn’t even know until she reaches down, feels the sliver of bone…”

I’m the kind of person who is always cold – who can sit indoors on a relatively mild day with the central heating switched on, and still shiver. The idea of your sub-zero homeland makes me nervous – I’m already bracing for the shock.

In just a few hours, I’ll be standing in the hotel foyer, scrabbling through pockets for a lip balm, when I’ll feel your gaze fall on me. My suitcase at my feet, coat half unzipped, I’ll cease my searching and raise my head.

But I know I’m not travelling in hope of reconciliation. You made that all too obvious in your tentative email – your painfully polite request for us to meet up so you could apologise in person. You offered to come back to England, but in an abrupt way that made it clear you’d rather not.

“It’s one of the steps,” you told me in our first Skype chat since you left. “I have to make amends. I’ll pay for your flight, Steph.”

My sister looked at me hard as she dropped me off at Bristol airport. “There’s no such thing as a free trip,” she warned me. “You don’t want to do something you’ll regret. Tell Arn you have your period.”

“My heart’s just fine,” I assured her.

I sit in my cramped airline seat and imagine Iceland’s enduring night – the magic of easing into darkness, no expectations of dawn until spring. Natural human needs for sunshine suspended.

The acceptance of it must feel like surrender. In England we fight against the cold, the rain, the shortened days. We whinge about needing to switch on electric lights at 3 or 4pm. Every dreary dawn is a disappointment. How much happier might we be to let our shadow-side out, rightful and at home, instead of fearing the dark like children?

If I think of it like that, I can see why you snapped, packed and departed. Your culture and mine are at odds when it comes to elemental things like seasons.

But people do make it work. They have lifelong love affairs despite fundamental differences. Your shame should be less about failing than for your willingness to give up on us so easily.

It’s not like we‘d need to live together, or even in the same country. There’s email, FaceTime and all those other modern conveniences. This flight, for example, takes just a few hours.

If I come all this way and you really do only want to apologise in person, face to face, breathing the same air and close enough to touch, no problem, I tell myself. But deep inside my chest, I feel something smouldering: a hibernating dragon preparing to stir. The naivety of hope isn’t always a bad thing, and in this case, that hope has a heart of fire.

The truth, of course, could not be more at odds to my imaginings. My chariot is, after all, a coach and then a mini-bus; my views sunlit and slanted with drizzle. Daylight comes late here, but dusk little earlier than in England.

The biggest surprise is the country itself. No trees, few houses, but tourists – so many tourists – all clamouring to see the sights.

And you, where are you? There’s a message at my hotel – an apology that I suspect, lips pursed, might be the first of many. Wasn’t the whole point of this trip your opportunity to say sorry? You’re busy at work, but will see me in the morning. You have sights to show me that you’re sure I’ll love.

What makes you think you can guess what I love?

I unpack my case, peel off my clothes and redress, adding the armour of a vest and thermal leggings beneath jeans, a long-sleeved top and the thickest sweater I own. Outside, the rain has stopped and thermal-heated pavements are already drying. A promising snowflake swirls past my nose.

By the time you arrive the next day in your four-by-four, snow is declaring itself the natural state of water here; rain was the anomaly.

Your eyes are the same, almost, although the creases around them seem deeper. There’s a fresh clarity in the way you look at me, as though I’m no longer blurred.

I turn my face away, ducking your gaze.

“Steph,” you say, and I shake my head. A honk of laughter escapes my throat, warding off storms of emotions threatening to descend.

You’re wearing a wool sweater that looks soft to the touch. For an intense instant, I want to rub my face against your shoulder – feel your knitted fleece against my cheek, inhale the lanolin. Instead I present my hand, firmly formal, reining in my beam. You blink, but shake it, agreeing to boundaries.

You tell me we’re going to feed the Icelandic horses.

“But I don’t like horses,” I protest, as we drive through the pewter pre-dawn light. It’s already 10am.

“You’ll like these horses, Steph,” you say, “They’re not a bit daunting. Vikings only brought what they could fit on the boats, and smaller animals allowed more space for alcohol.” You wait for me to join in with your amusement, but I’m only up for a smile.

Memories of nights waiting for you to come home in pieces crowd my mind. My stomach lurches as though it’s on castors.

Throughout our drive from Reykjavik to Þingvellir National Park, you’re quieter than I’m accustomed to. Your profile is sharply offset by the snow beyond, your lovely face tense.

The snow holds more colours that I would have thought possible – curves painted with blue and purple shadows, convex swoops gleaming gold.

At last the silence is too much. I say one word, aware of how heavily the two syllables sit between us. “Rehab.”

You inhale, your focus flickering from the road to me. Somehow your expression is one of relief. “Long time,” you say. “Long time coming.”

You nod. Your eyes return to the windscreen as you negotiate a patch of black ice. I flinch from the glimpse of unearthed pain boiling beneath your retinas.

Rather than bringing oats or hay, you pull in at a bakery and buy dark bread that makes my nose twitch.

“In England we feed bread to ducks,” I say. “And hedgehogs. But we’re not meant to. It’s bad for them.”

“We don’t have hedgehogs here,” you say, missing the point deliberately, I think. “Probably because we don’t much have hedges.”

The horses’ muscled bodies form a snow-matted wall, protecting against the worst of the weather. “They have a hierarchy,” you say as we approach, bread in hand. “This one at the front is the leader. That one alone over there is the outcast.”

The loner, I think. “Poor thing. Or maybe he chooses that,” I suggest, and look you in the eye. I see your jaw clench, then release.

I jump back, and narrow avoid face-planting into a ditch.

You catch me by one arm. “Careful, Steph, the little folk will have you.”

I know the answer – who in Iceland could not? But I suspect it will please you to tell me.

“The elves. It’s like politics in Britain. It’s always those who don’t own up to their convictions who are the loudest complainers about whatever goes wrong. Here, every bad thing is the fault of the little folk.”

I glance around us, and at this ice-white landscape where trees determinedly fail to flourish. I recall your favourite riddle on that subject, shared during a night of whisky, rum and tequila slammers overlooking Bristol harbour. “What should you do if you’re lost in an Icelandic forest? Stand up!”

But I don’t want to press the moment to shattering point. “Take me to see the geyser,” I say instead. “The one every other geyser is named after.”

You shake your head. “That one is snoozing these days. His cousin Strokkur is awake though. We can go there.”

So that’s where we drive to next, through hail and wind and the ice that’s slowly thawing between us.

We talk about weather, and the English way of filling silences with talk of the weather.

“In England there is always drizzle,” you say. “And you always need to discuss it.”

“Only because it’s constantly changing.”

“Oh yes, such dramatic change! From light drizzle to heavy drizzle to the kind of drizzle that somehow is lightest of all and yet makes you soaking wet.” You laugh and I laugh too, hearing fondness in your words.

“Mizzle,” I say, presenting the word shyly. “I think it’s a mix of drizzle and mist.”

“Mizzle,” you echo. “So many different words for rainfall.” You sound delighted. The ridicule I became inured to in your drinking days has filtered away. I allow my habitual anxiety to loosen its knots.

The sun creeps out and blue light particles ignite in the sky.

Geothermal heat unleashes lurid green algae, ochre, and a dense peaty brown with shades of purple and gold. A paved track leads through the blue-white snow, with rivulets steaming on either side. A group of sightseers cluster ahead.

You stride onwards as I slither carefully behind.

Everyone is staring at a single fathomless pool. The water is too opaque to see through, but I have the sense of something curled up deep, scales protecting it from scalding temperatures.

I think of the fissures scarring this terrain, hidden beneath the veneer of snow. A small gratitude wells in me.

The pool’s surface begins to slip and slide. A low rumble creates miniscule waves. Strokkur shoots up – a column of energy striking the frigid air. In an instant, it collapses. The crowd cheers.

“How’s that for timing?” you exclaim, and I spy a glimmer of your old joyful self. My insides churn, but I match my smile to yours and take your hand in mine.

Judy Darley is a British writer who can’t stop writing about the fallibilities of the human mind. Her work has been published in the UK, New Zealand, US and Canada, and performed in Hong Kong. Judy’s short story collection Sky Light Rain is out now. Find Judy at http://www.skylightrain.com  and  https://twitter.com/JudyDarley.