Tony pulled his jacket tight around his body, trying to squeeze himself smaller. Riding on public transport made him conscious of his size; like he took up too much space with his bulk. The subway doors closed on Tony’s tentacles for the third time that week. The thick, marshmallowy protrusions were bruised and swollen; as if wearing shoes wasn’t hard enough already. Why was he still here? He hated New York. He missed home, having friends, being understood.

Tony blamed bedtime stories, passed down from one generation of monster to the next. Hundreds of years of fawning over and fearing these mystical creatures called humans.

I’m gonna go see them for myself, he told his mother when he was young. She chortled, patted him on the head.

Now, years later, he had done it, as much to spite her as satisfy himself. Monsters aren’t spared familial dysfunction, just because they’re monsters. But it wasn’t what he expected. Humans weren’t the brave warriors of his bedtime fantasies. Most were cowards, ugly outside and in, and obscenely selfish. And New York was no glorious citadel; it was dirty and crowded and teeming with horrors.

Penniless, he was forced to find a job. Charity don’t last forever, kid, the woman at the shelter had sneered. Options for blue, tentacled monsters read like a list of jobs humans considered beneath them; invariably low paid, usually repulsive. Unblocking prison toilets seemed like the least vile option, and at least now he could pay for his dormitory bed. Stinking on the subway home only made him more of a misfit.

The car swayed, heaving the crowd back and forth. The red-faced, sticky man beside Tony sneered, recoiling from his tentacles.

Watch out, ya freak.

Tony muttered an apology, and wondered if the man knew he looked and smelt like a beet, stewing in his own sweat. Humans. Boris had lasted six months here before packing his bags, disgusted that humans regarded him as the monster. How was I supposed to know? he’d asked Tony. In the books, they eat everything. Louie fared even worse. He’d fallen in love with a human, and at first it seemed the feeling was mutual; but when he’d tried to take things further, she’d pushed him away. He’d made a run for it when he heard her on the phone to a vet, discussing neutering. Tony’s bedtime stories had been full of happily ever afters. He didn’t know anyone who actually got one.

Until, looking up, he saw her across the car. Brilliant fuchsia skin, partly obscured by a beige trench coat. No cheekbones, liquid yellow eyes, a hint of fang peeking between spongy lips. Sitting with tentacles crossed, ladylike. An angel, plucking at his homesick heartstrings.

Easing between the human sardines, he wedged his squashy body beside hers.

He took a wobbly breath.

She looked up. Her eyes narrowed.

Her pepper spray burned his face.

Amanda McLeod is an Australian author of fiction and poetry. Her words have appeared in Ellipsis Zine, Anti-Heroin Chic Magazine, Vamp Cat Magazine, and elsewhere. She enjoys warm days and rainy nights, and tweets about words @AmandaMWrites 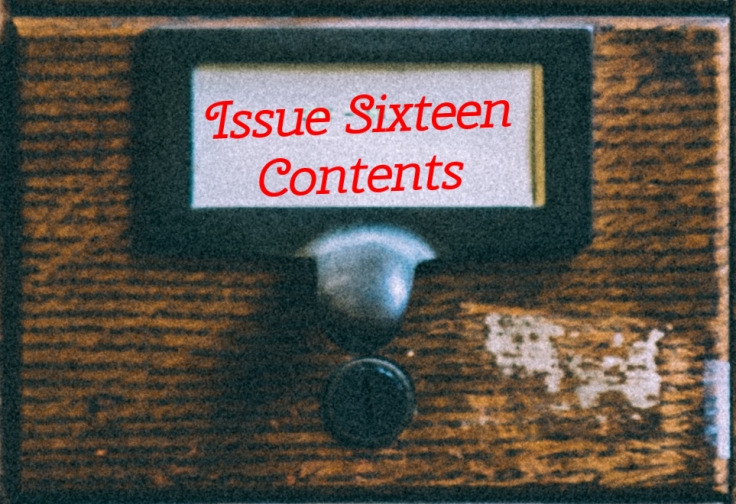