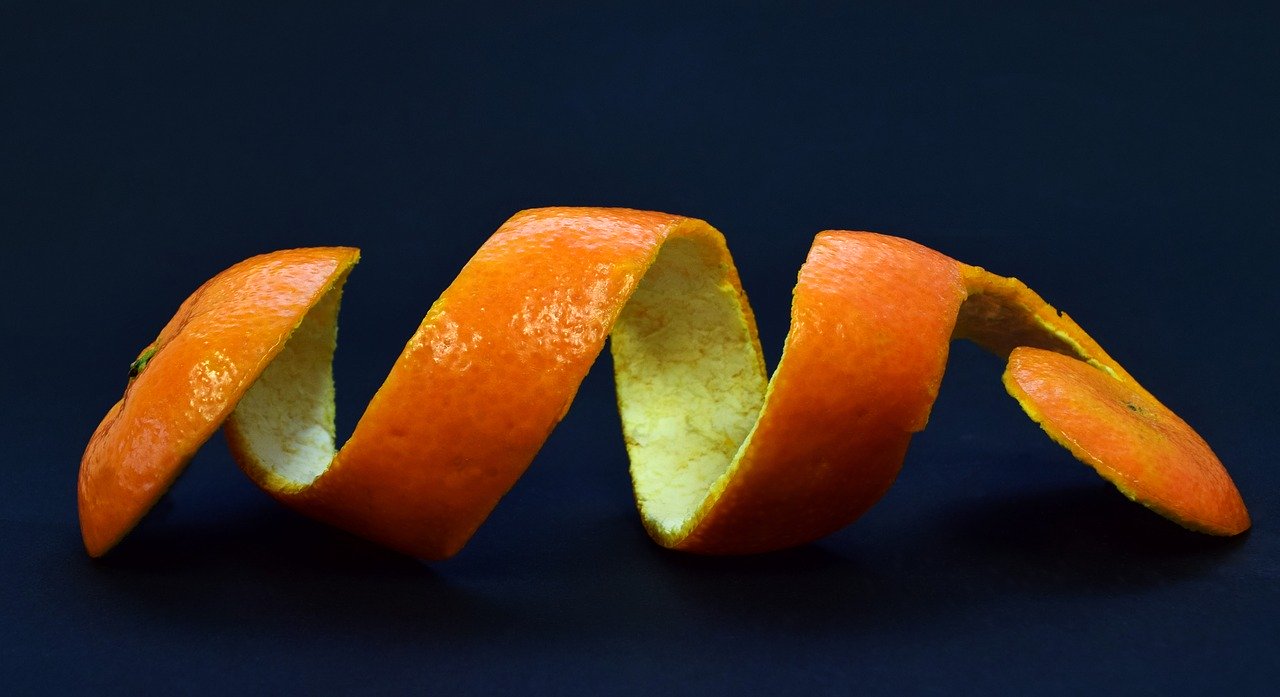 The girl pretends she’s Gretel, leaving behind a trail of tangerine peels. She sits cross-legged in the back of the cart, her legs having long outgrown the front seat, too tired to keep up with her mom as she speeds through aisles like those ladies in gym shoes at the mall. Trader Joe’s reusable bags crinkle under her butt while she digs dirty playground fingernails into the tangerine she’d snagged from the free fruit bin. The peel trail follows them up produce, down meats, up canned fruits and vegetables. Her mom doesn’t notice. Worry has her mom’s brows in a wrinkle, a funnel cloud forming over her head as she squints at oatmeal box labels. The girl pops tangerine into her mouth, having missed lunch. One bite is sour, the next sweet. She counts the segments, worried the last one will be sour and that it will be the sour taste that stays stuck on her tongue. She didn’t grab her backpack when her mom surprised her at school, so no water bottle no lunchbox no tissues. The items in the cart make no sense to her: peroxide, toilet paper, microwavable mac and cheese. Her mom took her out of school for this? She leans over and grabs Go-Gurts from the dairy display while her mom, still on the phone, tosses boxes of stick butter onto her lap as if she’s not even there.

They’re going in circles now, the girl can tell, because there’s the peel trail and there’s the free fruit bin again — no apples, just tangerines and a bruised banana. She stands and bends over the cart, nearly falling then regaining her balance by clutching onto the avocado display. She’s pretty steady for five-almost-six, but three avocados hit the ground. No one notices. The store is crowded, everyone on their phones. Funnel clouds and furrowed brows all over the place. She manages to snag another tangerine and slips the fruit into her unicorn hoodie for later. She loves me, she loves me not, she loves me, the girl sings in her head, popping segments of what’s left of the first tangerine into her mouth and sucking their juice—sweet, then sour, then sweet. Her stomach begins to hurt again, but she can’t tell if it’s because she’s hungry or full. Her mom is too busy on the phone. Virus-this, pandemic-that, her mom keeps saying, and the girl hears other shoppers saying the same words. Maybe they’re all talking to each other, the girl thinks, pressing her hot face into the cold bars of the shopping cart, looking from one worried face to the next. Maybe this is how we all talk now.

Kelle Schillaci Clarke is Seattle-based fiction and creative nonfiction writer. Her recent work has appeared or is forthcoming in Blood Orange Review, Superstition Review, Barren Magazine, Pidgeonholes, Crack the Spine and Ghost Parachute. She earned her MFA in Creative Writing from the University of Nevada at Las Vegas, but left the desert in favor of the rainy Pacific Northwest, where she can now be found wiping surfaces with bleach, temporarily homeschooling her six-year old, and tweeting @kelle224.