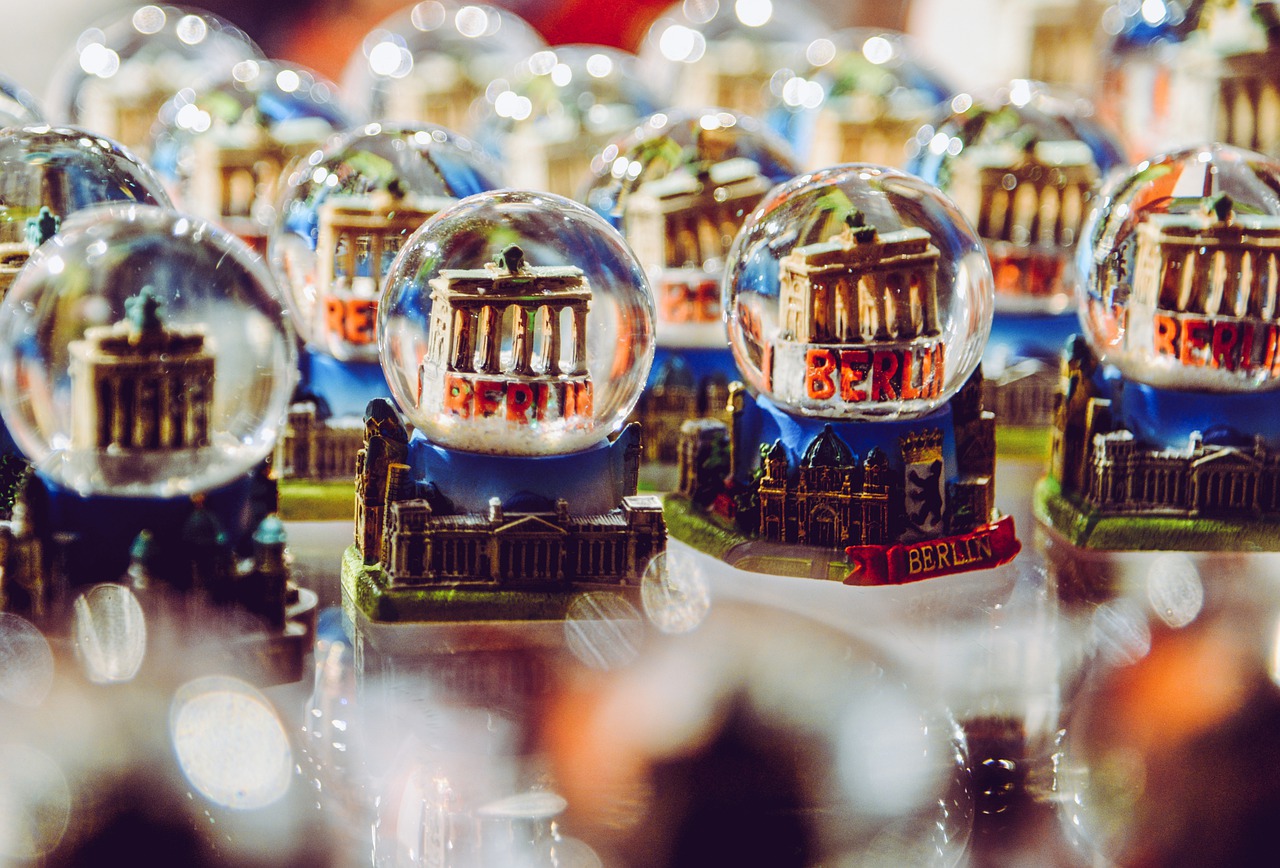 ‘Four ways to say thank you,’ you say. ‘The Brandenburg Gate lit up in blue.’

You hold your hands wide as if trying to show me the size of the landmark I have witnessed in many of its iterations – bullet-holed, walled, liberated by chisels and cranes. The first time I walked through it, I rested my forehead against one of its columns. Like a madwoman, your father, said. You must have seen the photograph. He framed it and hung it above his desk. The madwoman, a source of inspiration to her only grandchild, it seems.

‘I heard in England,’ you say, your gap year lessons seeping out, ‘that when the war ended they threw their clothes on over their pyjamas and ran out into the street. They tore down their curtains and turned on their lights.’

‘I heard in England,’ you say, picking up your bottle of water, ‘that the next day they dragged their tables through their front doors, draped bunting across windows and hedges, served cake and sandwiches, sang songs of patriotism and new days.’

‘Did you see the photographs of Trafalgar Square?’ you ask. ‘Teeming with people, like an ant colony,’ you say, mouth laden with water. ‘All singing and dancing and applauding. And the kissing.’ You pucker your lips as if I do not know the shape of a kiss.

I pick my cup up, so I have something to hide my smile behind.

‘My friend’s gran kissed an American GI,’ you say. Your eyes glisten with the gossip. ‘She told me he was the most beautiful man she ever saw and so eloquent.’

I nod, keep my coffee cup to my mouth.

Ah, there’s my old companion: silence. You look at the cobwebs in the corners of the room, the slope of the ceiling as it bows to the window. You worry at the label on your water bottle. A blush descends on your cheeks and neck. You press a hand to your face. You have never asked me how the war ended for me, my family. Your family. Your default setting tells you it’s a memory best kept in my head and my head only. And besides, you have the internet to answer that kind of question, don’t you?

‘So, the weather has been kind to us,’ you say. You wave at the window, at the nodding trees and the blue sky above Charlottenburg.

Your discomfort still spoils your cheeks and you slap your palms against your thighs as if that will change the rhythm of the room. I realise you’ve never had to be subtle, never had to slip into a basement, cramming yourself in between the beating hearts and sticky limbs of your building’s inhabitants during an air raid. You’ve never had to feel Frau Hirsch’s knees biting at your own, hear her impatience as you dare to take a millimetre she does not believe you’re entitled to. The petty squabbling of knees until it felt like bones were about to break didn’t end with the surrender, with VE Day, it didn’t even end several weeks later with Frau Hirsch’s death. She was attacked by three Soviet soldiers when on the lookout for water. She haemorrhaged blood like it was all she was made of; it took weeks for my mother and I to get the stains from our palms. Some mornings, even now, mind sleep-fogged, I catch myself scratching at my lifelines and heartlines.

I drain the dregs of coffee from my cup and rest it back on its coaster. I wonder where you will steer the conversation from here. To Brexit, perhaps. You’re livid, confused, hurt by that one. All your English friends profess to be Remainers, but I think you should tread with caution. No, not Brexit, we debate people’s morality too much when we mention that and the atmosphere doesn’t lend itself to such discussions today. Maybe you will tell me about your love life – I like hearing about the dating apps, the quirks of young men these days. I shake my head whenever you leave, can’t imagine picking a potential partner from a fingerprint smeared screen.

You bite your lip, cross and uncross your legs. The text on the bottle’s label grabs your attention and releases it sooner than expected.

‘What was the end of the war like for you, Oma?’

You lean back in your chair, indicating you have time. The bottle protests your grip. I wince at the sound it makes. I feel something within myself crinkle and crack. The odour, the texture, the vastness of Berlin in the days, weeks, months, after surrender begin to seep out and you nod and tilt your head in all the right places.

Emma Venables’ short fiction has recently featured in Mslexia, Lunate, and The Sunlight Press. She was a runner-up in the Alpine Fellowship Writing Prize 2020. She can be found on Twitter: @EmmaMVenables.