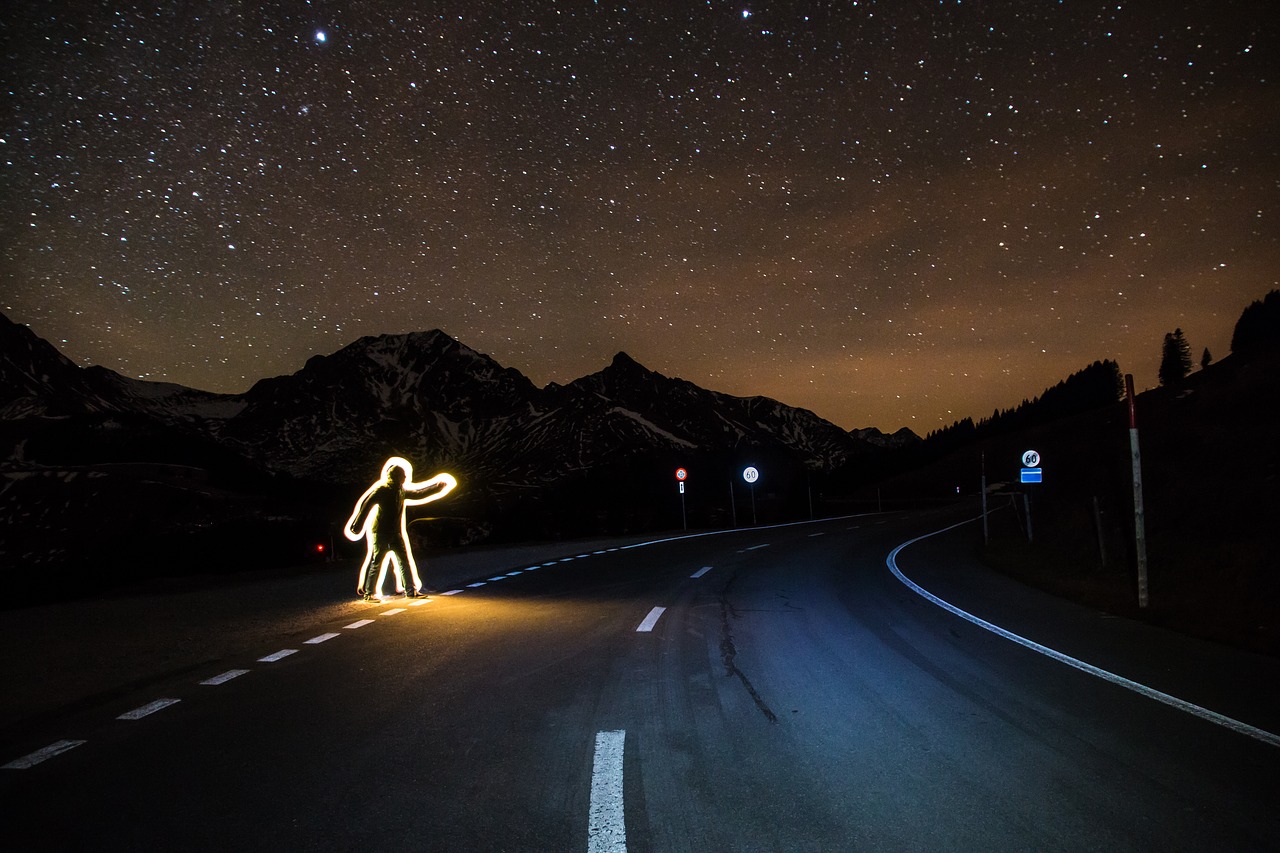 It was his thumb that caught my eye. Hell, if I hadn’t noticed it twitching, I’d a sworn he was a scarecrow. Like a weed this guy just pops up outta nowhere, standing dead still knee-deep in a crop of alfalfa. Being a long hauler, I drive this stretch of Interstate 5 all the time and see my share of hitchhikers tryin’ to bum a ride, and I ignore most of ‘em, but this one was different. This guy acted as if I owed him a ride.

Curious, I tapped on my brakes and slowed to get a better look. Dressed in a dark trench coat, he wore a Van Helsing hat casting a long shadow over him. I couldn’t make out his face—or if he even had one. He looked as if he fell right out of the Apocalypse.

Interstate 5’s Central Valley is flat and straight and has zero entertainment value. Just acre after tedious acre of farmland. If it were winter you could blame all the car mashups on the tule fog, but during the heat of summer, it’s the mind-numbing drive that lulls you to sleep at the wheel. So, to stop you from going insane, or splattering your brains all over the highway, when you see a stray thumbing for a ride you think of only one thing: company.

I slowed onto the shoulder kicking up gravel and rubbernecked my soon-to-be passenger. All I could make out underneath his hat was a scraggly beard. He had a disheveled appearance, or worse, like instead of riding in cars he’d been hit by a few.

Bringing my Peterbilt to a stop I kept reassuring myself he probably just needed a bath and a change of clothes. I opened the cab door and said, “careful of that first step, it’s a doozy.”

His odor preceded him. I reasoned it was because he was standing in a freshly fertilized field. Using the back of my hand, I wiped my eyes and said, “hello.”

He mumbled something and grabbed the door handle. It was almost sunset, but his hands looked discolored or stained with a distinct red hue.

Entering the cab his attention was immediately drawn to my bolt-action Remington mounted behind me.

His dark eyes flashed to mine before homing in on my rifle, salivating.

“C’mon, have a seat. I have an early morning delivery.”

Tight-lipped, the hitchhiker sat down and adjusted his hat further down his forehead. That’s when I got a good look at his hands and my grin disappeared.

Switching on my headlights, I pulled onto the highway and started second-guessing myself. Is this drive so dull, so boring, am I so desperate for someone’s company, that I should pick up any down-and-out who sticks out his thumb on the side of the road? Sadly, I was never one for thinking ahead.

Glancing over, I noticed how the dashboard lights lit his silhouette. An image from an old B-horror movie popped into my head. His eyes seemed to devour whatever light came near them like a black hole. I shook it off and drove.

After several miles stifling the urge to gag, I cranked down my window and let go with a loogie my childhood buddies would’ve been proud of. Like rotten eggs, my gut feeling about the stench coming from the passenger seat left a bad taste in my mouth.

“Where you headed?” I asked, wiping spittle off my chin.

The hitchhiker sat quietly, hypnotized by the white-dotted lines dividing the road.

Trying again, “You hurt yourself? Being a trucker, I get scraped up from time to time.”

A couple of minutes later the hitchhiker slowly tilted his head down, then slightly toward me before rubbing his hands like a major-league pitcher meticulously kneading a baseball. When he finished smearing the dried blood across his palms, he scratched his beard leaving behind several red specks dangling from his whiskers. Staring off into the distance as before, he hid his right hand inside his trench coat.

The miles dragged on in silence, until I said, “my name’s Frank, Frank Beamen,” and nervously offered my hand.

That’s when he turned, and I got the shock of my life. Etched between his eyebrows was a crooked line tattoo of a swastika. I figured he did it in front of a mirror using a dull switchblade. But it was his eyes that spooked me. They looked tired and empty, hollow. Honestly, he gave me the creeps.

“My family, they call me Charlie.” He deadpanned.

I quickly reneged on my handshake and clutched the steering wheel, digging my half-chewed fingernails into the black leather cover. Unfazed, Charlie had already returned his attention to the road, stone-faced. I began sweating. The taste of this evening’s diner chili began creeping up the back of my throat. I swallowed hard trying to chase it back down.

Breathe, Frank, breathe. I stared at the road trying to drive, trying to breathe, but my eyes kept darting over to him. My mind began playing ‘what if’ games. I lost everyone one of them.

When another speeder left me in the dust, I let out an internal cry for help. Pleading for them to stop. Please, help me! I just picked up a hitchhiker and it turns out he’s a lunatic!

Then it hit me. What if this guy’s a whack job? And I had no way of knowing, but what if the psych ward at nearby Bellevue Psychiatric Hospital was one patient short? What if this guy’s their man? I started having wild thoughts of Charlie hiding a knife or machete underneath his trench coat and was ready to gut me like a fish at any moment. What if he was the crazed escapee I read about in the diner’s newspaper? What if?

Then I decided to use the only weapon I had, my gift of gab.

“Where did you say you’re headed again?”

“Me, I’m hauling a full load of almonds down to Westley. Do this every week. I haul other products too, but I always seem to attract nuts. I mean, the folks in Westley really like their nuts. Not me, allergies you know. Anyway, where can I drop you? Next town’s Chesterville. How ‘bout there?”

Or, I thought, may I suggest a trip back to the Bellevue nuthouse? It was all I could do to keep my arms from shaking off the steering wheel.

Charlie didn’t bite. I rambled on for miles, making small talk about trucking and all the interesting folks I meet, hoping he’d come back to reality and opt not to fillet me and leave me for dead on the side of the road.

It was early morning with only the moon and stars lighting up the night when Charlie began fidgeting, moving his hand around inside his trench coat. I held my breath and got ready to slam on the brakes—I wore a seatbelt, he didn’t.

My heart was beating double-time when I was relieved to see a joint he’d it was only a joint. I exhaled and mopped my gray hair sopping with sweat.

Charlie lit up and took a long drag. He sucked in the smoke and let it settle deep into his lungs. Each time exhaling and filling the cabin with smoke. I thought there’s no need to take a hit, all I have to do is breathe. When he was done, he swallowed the roach and said, “Pull over.”

“But, we’re in the middle of nowhere?”

Charlie turned and sank his eyes deep into mine, “You’re not the one. Pull over. Now.”

I slapped myself for arguing the point. What do I care if he wants to be left out in the middle of nowhere? I made a hurried pit stop onto the dirt shoulder. Charlie opened the door which lit up the cab. Stepping out, his coat opened, exposing a large Buck knife, stained like his hands. It had been recently used.

Charlie took position on the side of the road. Dead still, he stuck out his arm and began twitching his thumb.

I popped the clutch and hit the throttle.

Russell Waterman is an Amazon published author, including his latest, “The Adventures of Dave Diamond,” a short story complication. His fiction has also appeared in Allegory, The Daily Drunk, The Blotter, Literary Yard, Jerry Jazz Musician, Potato Soup Journal and SIA.