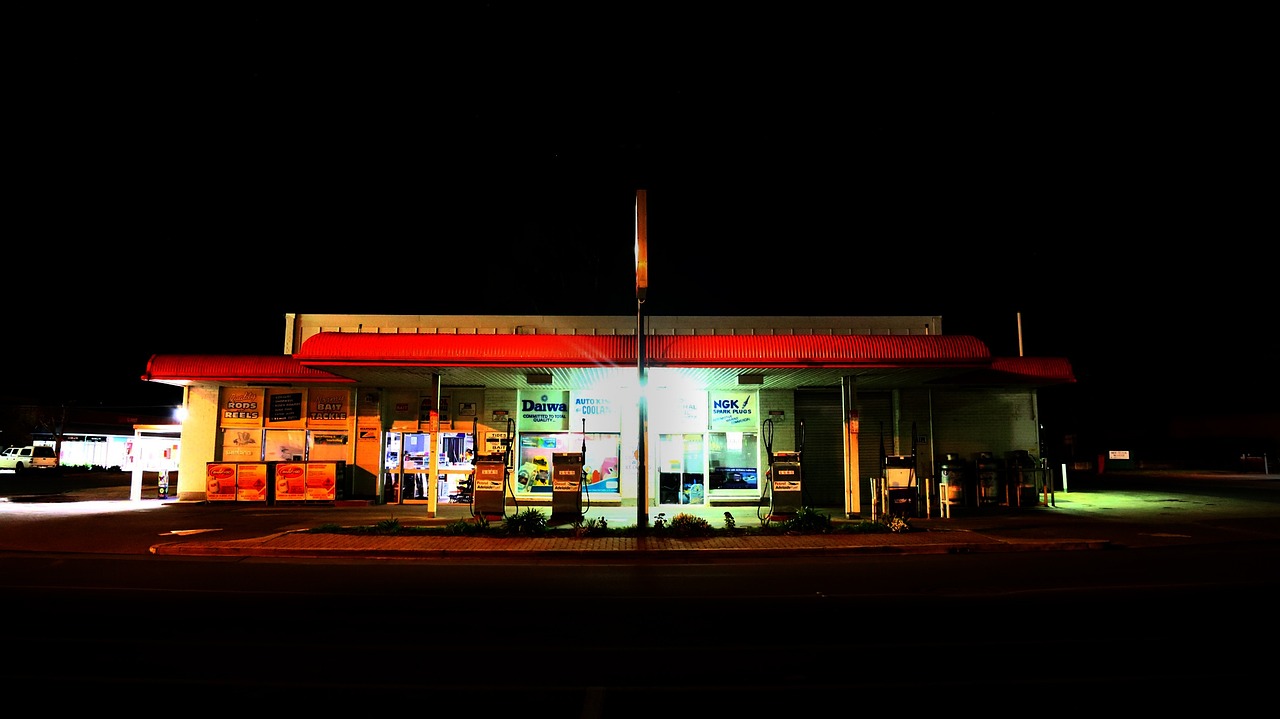 This is a city of night. After dark, it trembles with life.

I work nights, at a gas station beside the Autobahn. Like traffic, life passes me by. From my perch behind Perspex, I glimpse moments of it, wobbling images, no bigger than postage stamps. Funny what you get used to.

I ended up behind glass. An ambition fulfilled in some ways. A sliding partition punched with holes seals me off from people who seem distant, only inches away. As they drift through to their next episode, I am barely a supporting character. A mime.

After weeks on nights, days of the week seem unimportant. I know it’s Thursday when the Club Kids traipse across the tracks, jittery and wild-eyed, and knock on the glass to order candy and cigarettes. Look away patiently, as they scrabble with coins, identifying them by touch, when their eyes play tricks. Then they are gone for another week, sashaying into the blackness. Fortune, not skill, keeps them out of the road. They are so young, they can’t see any danger.

Before I took this job, I was a student of marine biology. But everything was different then. Ruby was still here.

I suppose it is like being in a cage. I hadn’t thought of it that way until Saturday, when a cackling man pressed his lips up against the pane and capered like a monkey until another, broader, man tapped fiercely on his shoulder and ushered him on.

Like any retail job, there are regulars, so habitual you can grab their Cheetos, their gum, their Pueblo in advance. We need only our eyes, a slight gesture; no words. My favourite is a woman I call Sierra. She comes every night for a pack of American Spirit on the way home from the casino where she works as a croupier. Her nails are always immaculate. Looking down at my own ragged cuticles, I am ashamed of their gnawed flesh, the flaked paint.

I could combine my talents, I suppose. Medical experiments. I’ve thought about it. They could pay me to sleep behind glass. Hook me up to a monitor, while they observe, sensor pads on my fingers measuring every twitch, every surge.

For now though, I am here.

Now there is no more Ruby, time is split into work and not work. A loveless blended wallpaper of sleeping and waking. Every night at 2 a.m. I take my break, while Heinrik, the supervisor, belligerently covers the register. I climb the stairs to the bridge high over the Autobahn and cross to the middle. Melding lights below me, I send plumes of smoke up towards the stars.

That night I looked down and saw her, a mystery woman sat on the bench beside the phone kiosk. That’s why she stood out, I suppose. A break from the old routine. I mean, she stood out anyway – tall, graceful, enormous hands. There was a holdall at her feet, one of those huge kitbags. In this city, you see them all the time. Slight, threadbare teenagers, like some wannabe Cheryl Strayed, legs buckling as they’re tipped forward beneath the hulk of them.

I am clockwork. Three nights, the same thing – the green bag at her feet, scrolling through something on a ritzy phone. If I were to cry out to her, my words would drown in the language of the road; whooshing tires, the symphony of horns warning against impulse.

When I was a scientist, a professor of mine gave a word of warning: I shouldn’t mind the cruelty of nature. That the aim. Is always. To try and not be cruel yourself. But I was. This same professor told me I was ‘dangerously ambitious’; as though applying that to my own life like a band aid could prevent me from doing any further harm.

When I was a scientist… A past version of myself. I am one now, still, only lapsed. Like a person who mislays their religion, because it seems at odds with their lifestyle. I’ve mislaid my ambition.

Once my studies were completed, I was cut adrift from my subjects. To remind myself who I am, I go to the reptile house three afternoons a week. Out in the raw plane of the zoological gardens, it’s the most brutal kind of cold. The reptile house is always warm.

I sleep Saturday away. When I wake, I struggle to get it together. My one night off: I have to go out, to the Lido, for the band I used to like with the fractious singer, the one with the flamingo pink hair.

The show is over when I arrive. On stage: another band who I do not care for. The crowd is ecstatic, shrieking someone else’s words as though they are their own. Sweat crawls down the walls. My skin feels see-through, fluorescent under the lights. I’m too hot, but know the cold outside is gruelling, so I push my way through to the back of the room. And her. She is taller than I remembered, the flat of one foot pressed into the wall. There is graffiti behind her: Punk Rock is Nicht Tot. The old symbol of Anarchy.

First circuit: I don’t even look.

Circuit two takes in the whole room – plus the bathroom, briefly, to check my teeth, tussle with my hair.

I open my mouth and I can’t remember how to talk exactly. Beautiful people make me nervous.

Waiting for someone?
Not really. I just came to see the band.
I’m good at waiting. Not tables. No, I’d say helpless at tables. But other things.
And I am. Good at waiting. But, she doesn’t ask, doesn’t speak again, only smiles.
I smile back, but there’s a bite. I hate being pitied more than any brush off.
A lull, then:
You have a heavy bag.
She looks up at that.
Big enough, she joked, to carry a body. Ruby’s would’ve slipped in there with room to spare. Pieces of the girl so small and unafraid.

She moves off through the crowd like liquid. Shimmering inside like a Club Kids gel bracelet. Then the lights go out and the crowd’s cries switch from euphoric to chilling. A power cut. The city, so alive at night, is famed for them, striking without warning.

A week later she appears in gloaming. She slinks up to the window the bag knocking round her shins. In dimness of the garage forecourt, fingers splayed, she looks at me as though startled that I could exist in real life, as I am often startled myself at the sight of my own reflection.

Her voice is robotic and so low, I almost don’t understand. What she is asking for, in her slow strange way, are those gummy sweets that are sets of teeth – three packets of pink candy, inset with tiny white squares. She tips me five Euro for service I didn’t provide and sails away.

I lost Ruby at night. I was at my perch, playing solitaire with loose Smarties when the road took her. Sailed out into the blackness, as the juggernauts thundered on.

Too much mephedrone, they said. Distorted how things were. The din of the road, pulsing and rhythmic, inviting her out to dance. She thought she had wings. She expected to fly up, over the speeding metal boxes, to catch the underside of the bridge and dangle there, powerful and carefree, her legs swinging. A superhero, a comic book Catwoman. Instead she became a pile of broken bones, a beatless heart at their centre.

There’s a certain number of times the human body can stand a shock. If I scrunch my eyes closed, there’s an outline. I’m not sure if it’s hers. Heinrik is the only one who knows me. He knew me with her and sees that without her, I’m nothing.

In a second, I see my future beside the road. I yell for Heinrik, I need to go on break early, it’s an emergency. Spring up the steps to the top of the bridge and scan the darkness below. Wait. A spill of sweet teeth on the steps to the bridge like a fairground breadcrumb trail to lead me home.

Slick of wet road, lights scampering across. She shivers in the moonlight. My own teeth are chattering, I forgot the trapper coat I wear, still on the peg.

I stagger down the other side, stumbling over the last few steps. She’s bending over. A shooting pain shatters through my leg as I struggle towards her. Wait Please. I run now, thoughts spilling out.

I have so much to tell her. How I am cooped up at night, sleeping the day away. How there’s a fashion in the pizzeria here for dropping rocket on top of everything.

I tell it to the stars, because she is gone and I am powerless and sorry about it. I liked being in control of someone else. I’m not especially proud of that.

ZOË RANSON is a fiction writer from Hackney via Walton-on-the-Naze. She writes stories from the very short to the epically long and, sometimes, for the stage.
Twitter: @zooeyr